How the immune system responds to foreign invaders 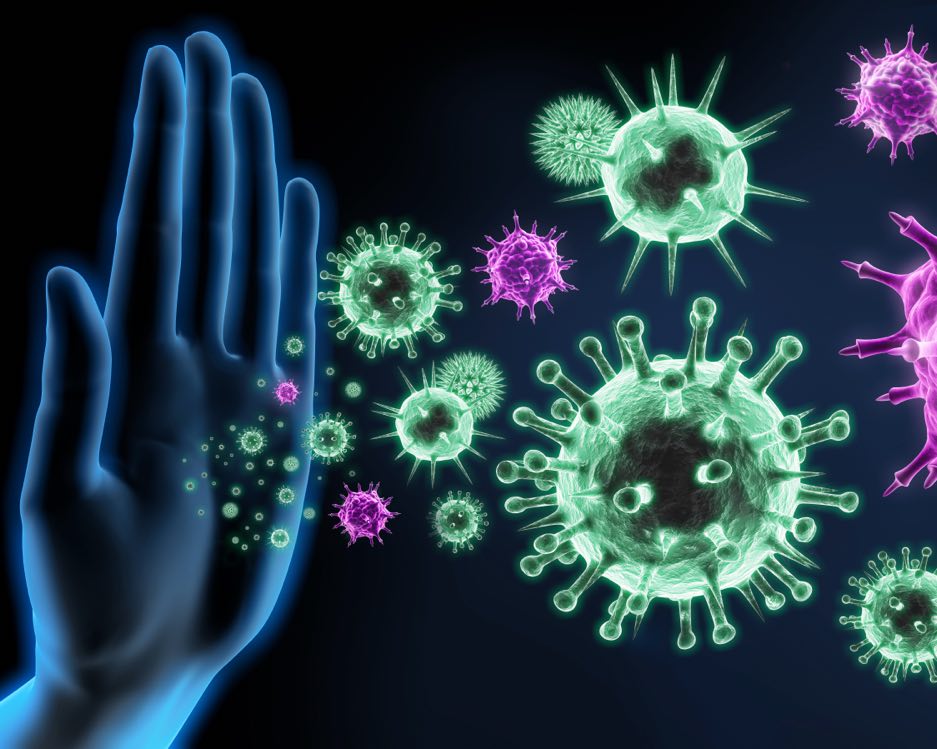 The immune system is made up of two branches: innate immunity and adaptive immunity. Both systems work cooperatively, with the adaptive system relying on the innate system to let it know about potential pathogens.

The innate immune system is the first line of defense against disease. It responds to foreign pathogens within the first few days of exposure and then works to prevent their spread throughout the body. This immunity responds in the same way to all pathogens, even those that the host has not been exposed to previously.

The innate immune system firstly tries to prevent foreign invaders from entering the body through physical barriers such as:

Bacteria, viruses, and parasites that are able to pass through these barriers damage cells that release signaling molecules called cytokines, which incite an immune response.

Cytokines attract specialized white blood cells called phagocytes that can ingest, break down and destroy foreign or damaged material in a process known as phagocytosis.

Phagocytes bind to molecules found on the outside of cells, called antigens, in order to begin phagocytosis. Once digested, the antigenic fragments are carried to the cell surface by the major histocompatibility complex (MHC), where they activate cells of the adaptive immune system.

The first phagocytes to encounter foreign invaders are located in the tissues of the body and are called macrophages. Macrophages also release cytokines in order to recruit other phagocytes called neutrophils and dendritic cells to the site of infection.

Neutrophils destroy invaders via phagocytosis while dendritic cells carry antigenic fragments from the degraded pathogens to nearby lymph nodes. There, they assemble lymphocyte cells of the adaptive immune system to further fight infection. 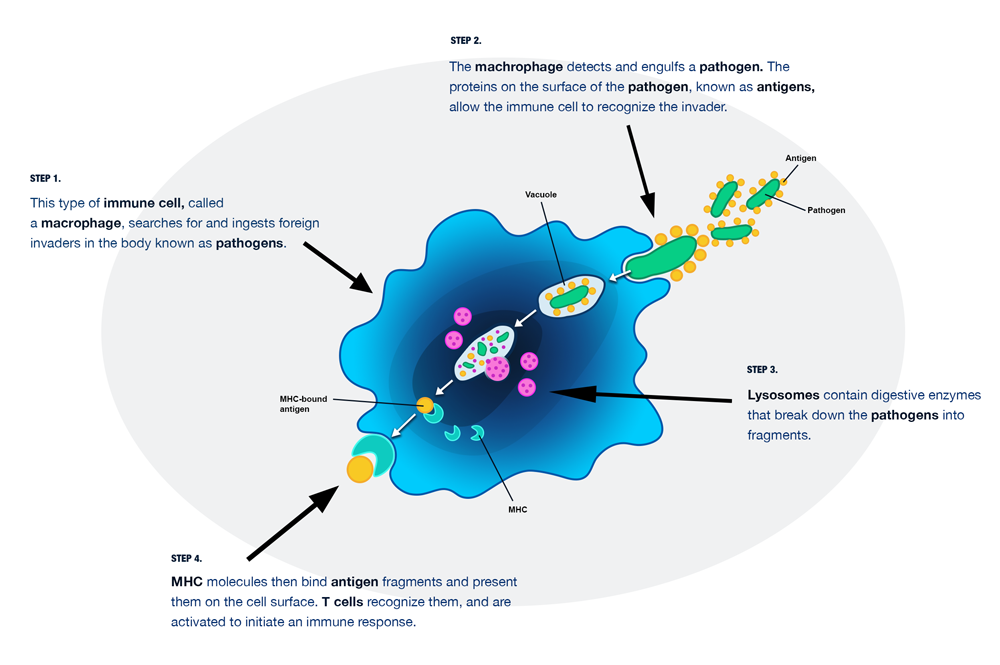 Figure 1. Phagocytosis of a pathogen by a macrophage.

There is a type of lymphocyte unique to the innate immune system that does not require activation from other immune cells to kill virally infected or tumor cells. These cells are known as natural killer (NK) cells and they begin acting around three days post-infection.

NK cells patrol the body, recognizing MHC molecules on the surface of cells, which prevent NK cells from killing. Cancer cells and infected cells often lose their MHC, leaving them vulnerable to NK cell attack. Once the decision to kill has been made, NK cells secrete cytokines, enhancing the immune response from other immune cells.

The complement system refers to more than 30 proteins that circulate in the blood in an inactive form. Upon recognition of a pathogen, these proteins become activated and release cytokines, and initiate an amplifying cascade of further protein breakdown.

The result of this complement cascade is stimulation of phagocytes to clear foreign and damaged cells, inflammation to attract additional phagocytes, and activation of the cell-killing membrane attack complex (MAC). The job of the MAC is to penetrate the pathogen’s cell membrane, leading to death. 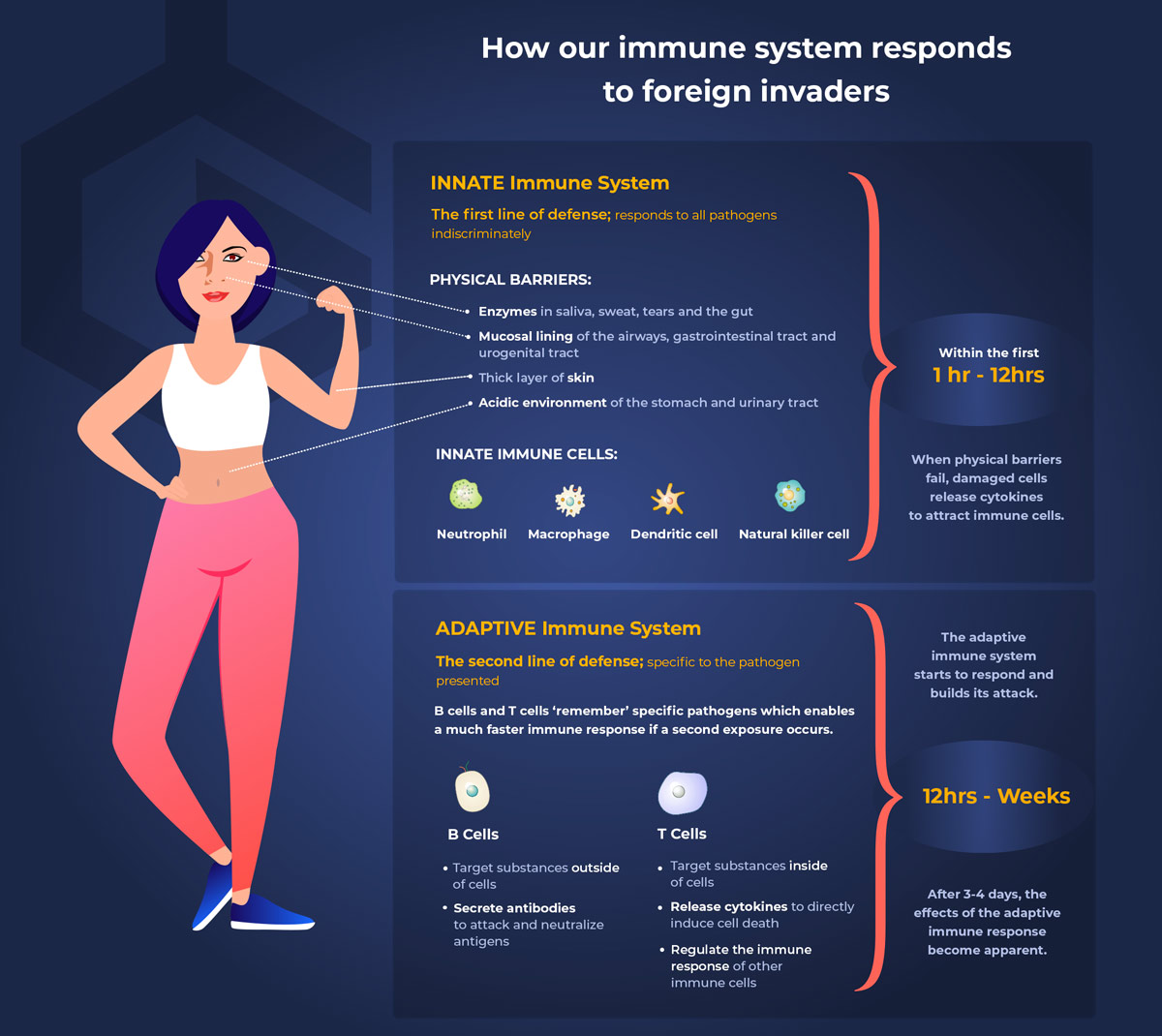 The adaptive immune system involves the rapid increase of lymphocytes called T cells and B cells from one or a few cells to millions. Each clone that originates from the original cell fights the same pathogen.

B cells and humoral immunity

B cells mature in the bone marrow and function in humoral immunity, which targets substances found outside of cells, in the body fluids.

Humoral immunity begins with phagocytosis of a pathogen by a macrophage cell, which presents the MHC-bound antigen on its surface. T cells bind to the antigen and become activated, which in turn bind and activate B cells.

Some activated B cells differentiate to create plasma cells that secrete virus- and bacteria-fighting antibodies, while others become memory B cells that speed up the body’s response to a second exposure.

B cells, along with macrophages and dendritic cells of the innate immune system, are classified as professional antigen-presenting cells (APCs). APCs present MHC-bound antigens on their cell surface, allowing for the specificity of adaptive immunity by T cells.

T cells are so named because they develop in the thymus before differentiating into either helper T cells or cytotoxic (or killer) T cells. These cells function in cell-mediated immunity, which targets antigens inside the cell and destroys pathogens by releasing cytokines.

Cell-mediated immunity begins when helper T cells are activated by APCs and begin assisting other cells of immunity. Helper T cells release cytokines that regulate the immune response in a variety of ways: helping B cells to differentiate and produce antibodies; producing an inflammatory response; as well as activating cytotoxic T cells and macrophages.

Cytotoxic T cells are able to directly kill virus-infected and tumor cells. Most cytotoxic T cells express receptors to a specific antigen and once bound, create perforating enzymes that rupture the cell wall. This process disintegrates the cell and thus prevents spread.

Another type of T cell called a regulatory T cell (Treg) is responsible for maintaining tolerance to “self” antigens, or antigens found on the surface of healthy body cells. Tregs actively suppress the immune response of other cells in order to prevent self-reactivity. However, the adaptive immune response can make errors at times and attack itself. When this happens, autoimmune diseases such as lupus and multiple sclerosis can develop.